Pyramids build by WEC Ltd use the same ‘sacred geometry’ as found in the Great Pyramid of Giza. It is based on ‘ The Sacred Cut ‘ or ‘ The Golden Section ‘ which is an unending ratio found in Nature, in the human body (for example, the length of your finger bones) and throughout the Great Pyramid.

PHI is considered to be the most aesthetic proportion of division and was used during the Renaissance by the great masters. Known as the summation series, the succeeding terms beginning with the lowest whole number are obtained by adding together the two preceeding terms which produces the ratio of PHI.

This study by Leonardo DaVinci shows the ‘Golden Section’ as a basis of measurement in the human body.

The sacred pentagon and five pointed star diagonals divide each other by this ratio. 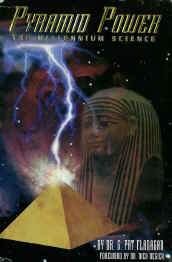